The Pokémon community is freaking out over the latest rumors. But where are they coming from? Can you trust any of them? And, by the way, what is really Pokémon Let’s Go? Below, we’ll go over the strongest evidence of this game’s existence and gradually reveal what it is… or at least what it could be.

The strongest evidence came out on May 16, 2018. Fans discovered that web domains for pokemonletsgoeevee.com and pokemonletsgopikachu.com had been registered. The registration took place on May 15, exactly when the rumors exploded.

If you check it out, the owner of the two domain registrations is CSC Corporate Domains, Inc. This same company registered pokemon.com back in the day and also domains for Pokémon Sun and Moon for Nintendo. This is important because it’s not just  some fan-troll registering these domains.

“What a coincidence. On the 15th, people start talking about the new Pokémon game and suddenly Nintendo decides to register domains. Why didn’t they register them before?” you may be thinking.

Something similar happened in 2016, when rumors started popping up about Pokémon Sun and Moon. Nintendo registered the domains and literally revealed the games the next day. It’s possible that the Great N delays registration to avoid raising suspicion and, when evitable leaks happen, they register the domains to prevent some clown from taking them.

Does this mean we’ll see an official announcement about Pokémon Let’s Go Pikachu / Eevee soon? Leaker Emily Rogers posted in the ResetERA forums that the reveal could take place next week but she doesn’t rule out Nintendo making the announcement earlier due to leaks.

The first image of the game

Last month, in April, the Twitter account @pixelpar, another specialist in leaks, posted an image of what the new Pokémon game for Nintendo Switch could be. 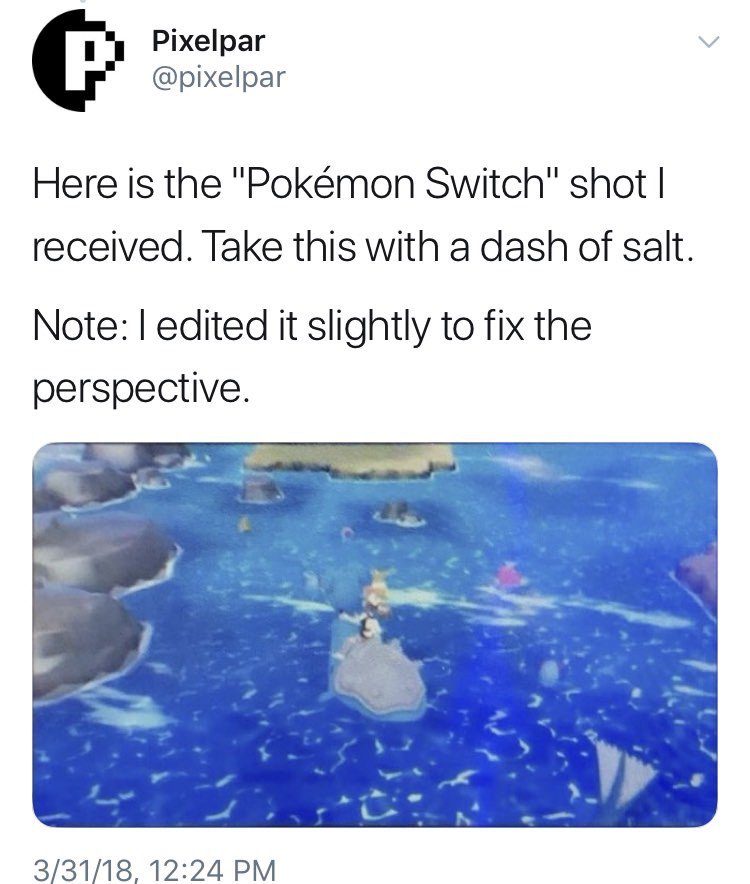 At first, nobody believed the image. But now it’s taken on new relevance for two reasons. The first is that the trainer has an Eevee over his head. The second reason is that some fans have realized that this photo shows a recreation of Route 21 from Pokémon  Blue / Red / Yellow.

Since the image was revealed before the rumors that Eevee would be one of the important Pokémon and before the return to Kanto, the evidence is undeniably authentic and shows the game in action. Now, whether it’s an image from the final version of the game or from its early development is another matter.

Some of the most important clues were in plain sight this whole time, but we didn’t realize it until now.

Junichi Masuda, the director of Game Freak, the developer behind Pokémon, had been suggesting the content of the next game for days. Check out his latest tweets:

And here we’ve got one of the most recent promotional videos: 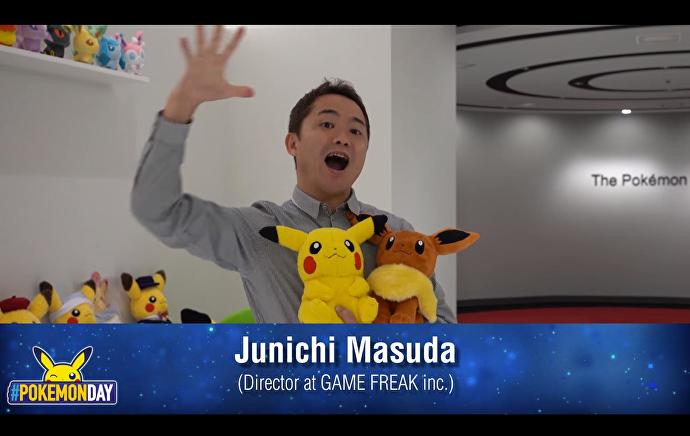 Is this the official logo?

Another leak has been the alleged logo of the Pikachu version. 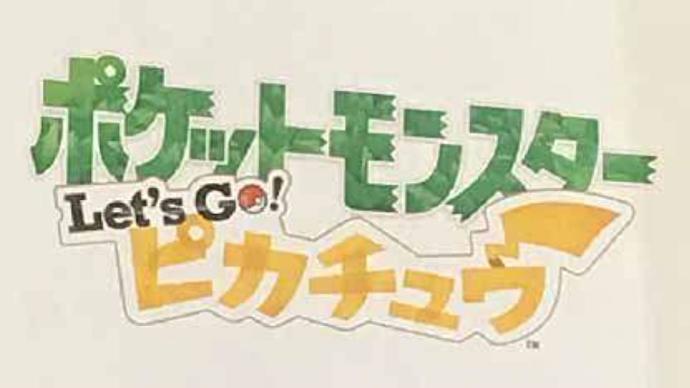 Where did this logo come from? One of the sources that has leaked it is Twitter user @pixelpar. Is he trustworthy? See for yourself below.

Pixelpar had been posting a few strange sketches on Twitter. 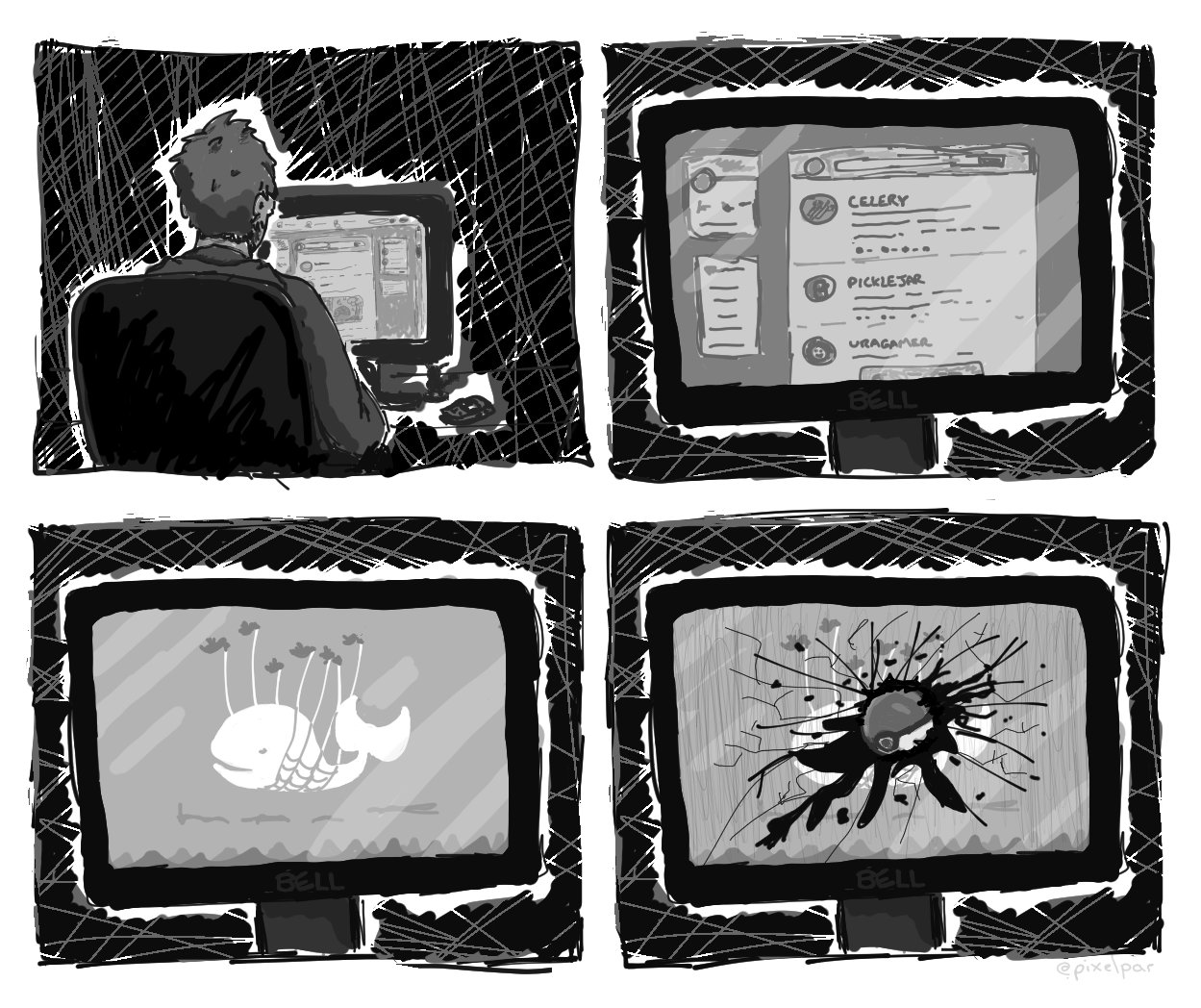 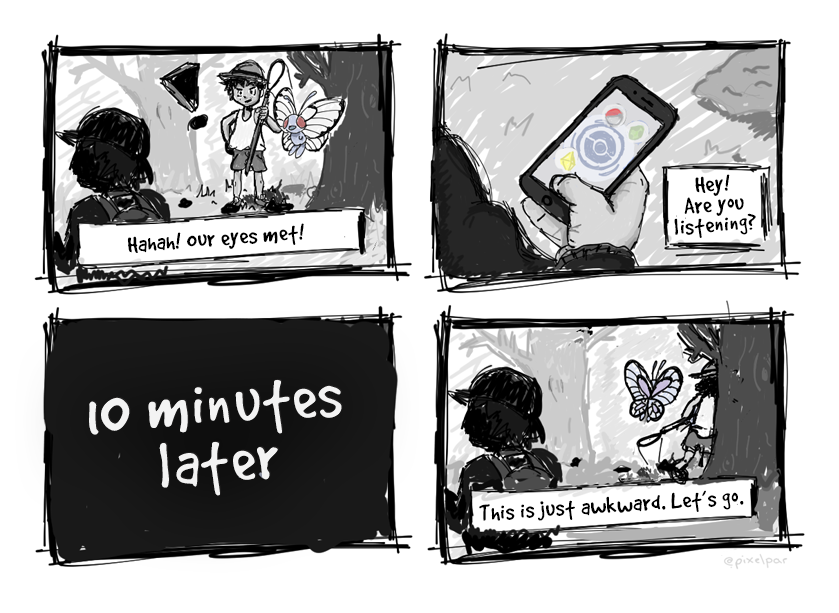 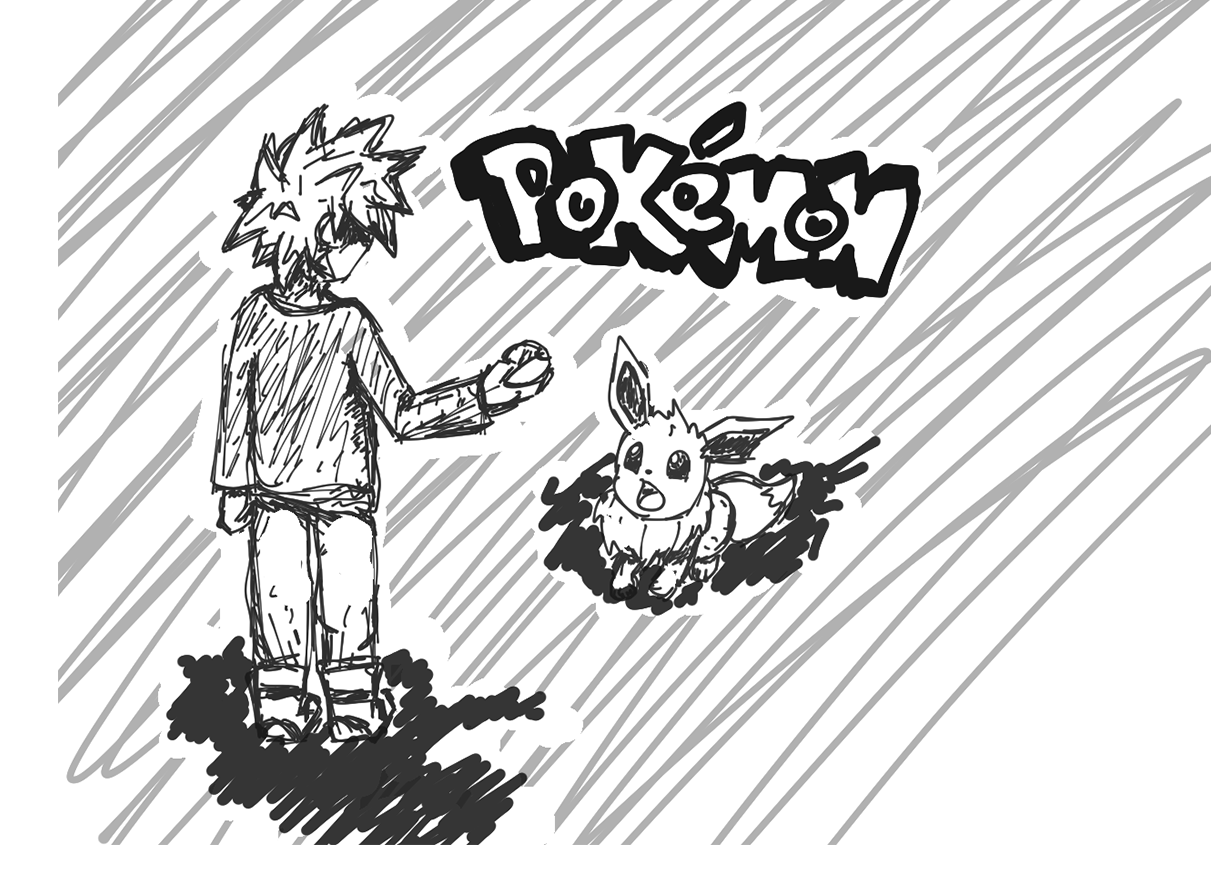 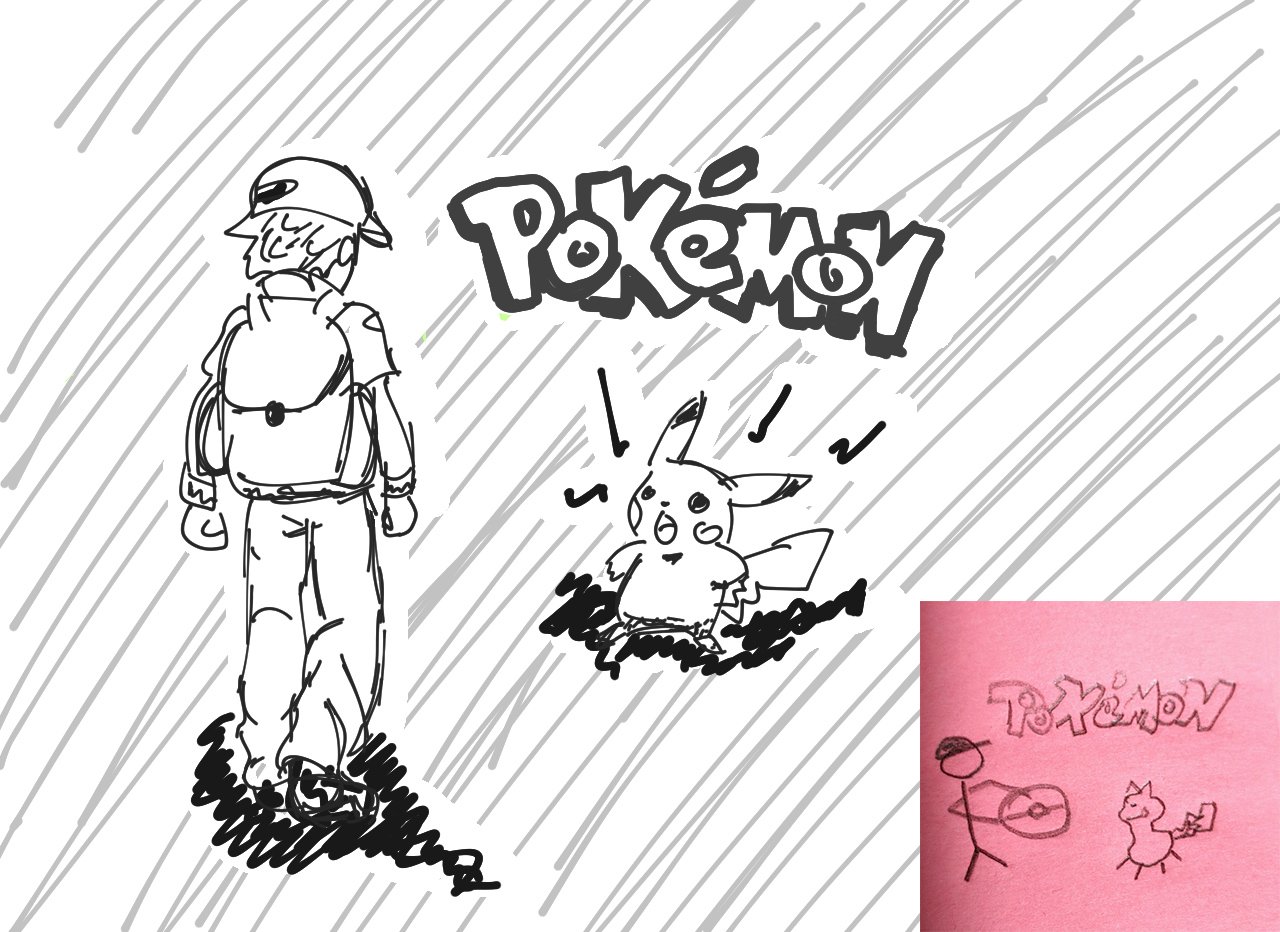 Pixelpar ended this series of sketches with this video explaining that the truth was hidden in these sketches:

These sketches also reveal that the game will have elements taken or inspired from Pokémon Go. Sadly, we don’t know any other details.

So, this Twitter user deserves our trust when he suddenly revealed this: 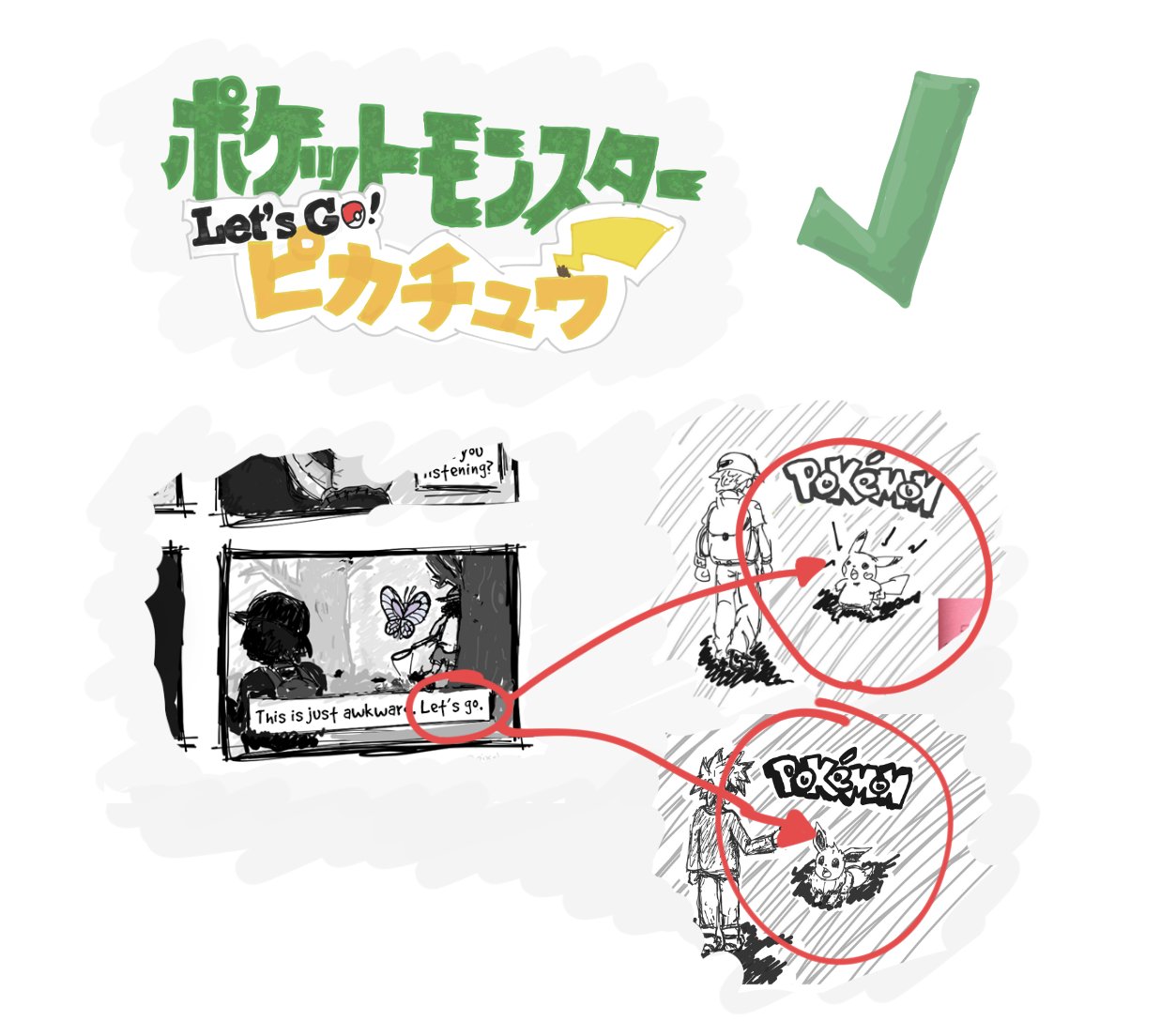 That original evidence wasn’t a joke

The first hard evidence of Pokémon Let’s Go Pikachu / Eevee was taken as a joke on April Fool’s Day.

Specifically, a mysterious message appeared in the shady 4chan forums. We’ve left this until the end because the rest of the evidence, which came out later, helps verify it. 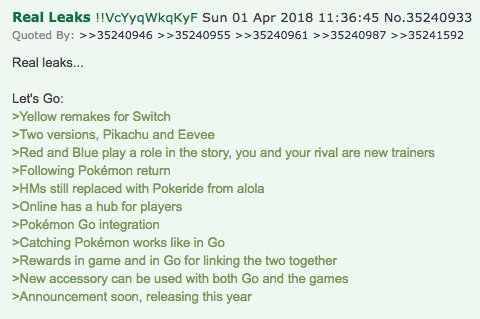 The message said that the Pokémon game for Switch will be a remake of Pokémon Yellow, with two versions (Pikachu and Eevee), Blue and Red playing a role in the story, and both you and your rival as new trainers. It also said that following Pokémon will return, Hidden Machines will be replaced by Pokéride from Alola, Online mode will have a hub for players, there will be integration with Pokémon Go, capturing Pokémon will work like Go, there will be rewards for linking it with Pokémon Go and there will be a new accessory that can be used with both games.

It seems like a joke, but as you can see, all the evidence (the image of Lapras, the Blue and Red images combined with Pikachu and Eevee…) has ended up being true.

At the start of 2017, the portal Eurogamer shocked Pokémon fans by revealing that Nintendo would launch a game called Pokémon Stars for Switch. This would be an HD port of Pokémon Sun and Moon. With this port, Nintendo’s plan was that Switch would have one game from each of its three-star franchises in its first year: Mario, Zelda and Pokémon.

But in a Pokémon Direct, Nintendo announced two pseudo-expansions of Pokémon Sun and Moon for Nintendo 3DS: Pokémon Ultra Sun and Ultra Moon. Where the heck was Stars?

Eurogamer has taken advantage of the excitement of latest rumors to clarify that, according to their sources, Nintendo decided to turn Pokémon Stars, a “simple” port, into something more ambitious: a remake/sequel of Pokémon Yellow.

In theory, since Game Freak already had models of many Pokémon in HD thanks to the Pokémon Stars development, the transition shouldn’t have been too painful. However, it’s possible that Eurogamer has come up with this explanation to try to clean up their bad image after the failed leak.

Now, patience… though you won’t need much

Now we just have to wait for Nintendo to make a move. Luckily, you won’t have to wait long. All the leakers have insisted that the reveal of the new Pokémon game is close. In theory, it could be before the end of the month. Soon enough!

Oh by the way… Pikachu or Eevee? Which one would you choose?